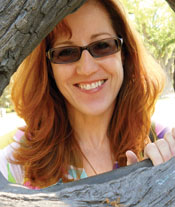 Malaika King Albrecht’s chapbook Lessons in Forgetting was published in 2010 by Main Street Rag and was a finalist in the 2011 Next Generation Indie Book Awards. Her poems have been published in many literary magazines and anthologies and have recently won awards at the North Carolina Poetry Council, Salem College and Press 53. She’s the founding editor of Redheaded Stepchild, an online magazine that only accepts poems that have been rejected elsewhere. She lives in Pinehurst, NC with her family and is a therapeutic riding instructor.

In On the Road, Jack Kerouac professes his attraction to people who never yawn or say a commonplace thing, and I have a feeling that Spill by Malaika King Albrecht would make him sit up and say Whoa…! Powerfully gritty and honest, Spill refuses to look away from life’s ugliest moments — from the floods in New Orleans to baby mice drowning in a bucket of water — and finally lands you in Serenity Lodge in an “orange chair smelling of singed hair.” But all the while a fragile stream of hope trickles unafraid toward its Source, and Malaika reminds us that “when tossed upside-down in the surf / unable to discern which way is up / the natural swimmer just breathes out / and follows the bubbles to the surface.” Spill is breathtaking.

–Robin Stratton,
editor of Boston Literary Magazine,
author of 5 books of poetry and prose, most recently the novel On Air
These poems on addiction and recovery move with the fluidity suggested by the book’s title, as well as with the loss equally suggested by it. Intense, emotional, real, Malaika King Albrecht shrinks from no truth.

–Scott Owens,
author of Something Knows the Moment

Another Look at Medusa
I.
Tonight while he nods,
stoned, I magic-marker
Medusa on his chest,
draw copper snakes
angry as thoughts
hissing around her ears.
Even permanent ink isn’t.

II.
Watching him breathe
with the Gorgon rising,
falling, my own breathing
doesn’t slow. I would like to lie
still as stone in his arms,
think nothing and sleep.

III
Some say we see ourselves
in others. What of a shield
held in a mirror, endlessly
reflecting the other, and still,
seeing nothing?

IV.
I remember when he kicked
the small of my back
with a steel-toed boot,
made one vertebra a hot stone.

V.
Here wisdom doesn’t shield us
though we are guarded,
and our eyes shut with the sound
of breaking glass.

VI.
When Medusa dreamed a mirror,
she saw herself for the first time.
Quick as cobras spit,
she said, The only stone’s
my own thick tongue.

What I Say to the Admissions Counselor
at Serenity Lodge

Who says angels don’t smoke?
I don’t know who these angels work for.
These aren’t your momma’s
chubby babes with wings.
These shit-your-drawers angels
made my hair ignite just before
I jumped in the shower again.
The dirtiest sex happens
in the shower with a dealer.

One angel spits the sun
into the sky because the moon
has no remorse even after all
these years of watching us
in the dark… It’s all good
to the moon. Regret’s
necessary, so these angels strip
the hotel of its paint,
make the sheets gray.

After 3 days awake, look up,
notice yourself naked in a ceiling mirror
surrounded by angels with tongues
like flaming swords, horrible as truth,
and arms like lightning striking
thunder in your chest.
See if you don’t end up here
in this orange chair smelling of singed hair,
signing yourself over to the cleaners.
My brain needs washing
after those angels smoked me.
Can I hum the next part?
I’m trying to forget the words.

getting there is half the fun

to where you meet the tiger pacing the cage

of your veins on an ex’s bathroom floor

take your box of ferrets and bees that don’t sleep

past Toomuch but staying just this side of I’veOD’ed

take your exit of Plainfucked

where the crack in ceiling above the hotel bed

is not the smile of god

but just something broken above you

I. how legs work

III. how a mouth works

Be the first to review “Spill” Click here to cancel reply.