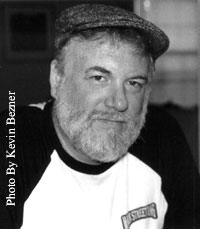 He won his first writing contest at fourteen and earned his first publishing credit at fifteen. Since then, his work has appeared in such places as The Asheville Poetry Review, Black Bear Review, Fennel Stalk, Gypsy, Howling Dog, Impetus, Iodine, Plastic Tower, Pudding, Slipstream, Southern Poetry Review, and Sundog (The Southeast Review).

His work has been anthologized in Along the Lake: Contemporary Writing from Erie, PA (Ye Olde Font Shoppe, 2005), No Hiding Place, Uncovering the Legacy of Charlotte-area Writers (Down Home Press, 1999), and Positive, A Different Meaning Now (Renaissance Poetry, 1993).

In 2001, M. Scott Douglass was awarded a grant from the Arts & Science Council of Charlotte & Mecklenburg County to publish his first full-length collection, Auditioning For Heaven.

Mr. Douglass spent twenty years as a dental technician, twice earning certification. During that time he also coached baseball and basketball and owned a collectibles/bookstore. He’s also had experience in construction and demolition and, yes, he really did breed rats for the Pathology Department at the University of Pittsburgh. Then there’s the time he wrestled a lion…but that’s another story.

It was 1991 when Shawn Pavey, Rhonda Pumphrey and I met at a monthly poetry event: Poetry Sharing, hosted by Barbara Lawing. Charlotte had little in the way of a literary scene at the time. There were pockets of writing groups, the Charlotte Writers Club, some galleries and small bookstores would occasionally host readings, but there were no independent small press literary magazines.

We met once a month at Ubiquitous Gallery on 7th Street in Charlotte’s Elizabeth neighborhood; drank wine, read poems and lamented the fact that there was no local magazine and, hey, wouldn’t it be cool if we could start one up. We talked about it for nearly a year. I bought about a dozen small litmags every month to compare what they were doing.

Then one day A.A. Jillani (AJ) came to a meeting and pitched his idea for The Charlotte Poetry Review. I suspected Charlotte didn’t have enough unity among its writers to support one magazine, let alone two, so we put our plans on the back burner and supported AJ.

AJ had some great ideas and he knew the printing business. He was a hard and dedicated worker and managed to bring together writers who had formerly not even know each other existed. Unfortunately, his model for how the magazine would pay for itself didn’t work out. It lasted a little over three years and then went the way of so many little magazines.

CPR, was the classroom from which Main Street Rag Publishing Company sprang. I had watched and helped AJ over the years and we became friends. When it came time to start Main Street Rag, I went to AJ for advice as well as printing. The company he works for, Metro Mailing & Printing, printed all of MSR’s covers for the first two years. But before I would commit to starting a magazine, I needed a project to get my feet wet; a project where I could get some experience without having to worry about any of my possible mistakes devestating some poor poet’s sense of self-importance. I needed a guinea pig.

It was January 1996. I had just turned 40. I had a manuscript that was a finalist in three different chapbook contests. The phrase, Physician, heal thyself, was playing in my head, but money was an issue at the time. So I took my idea to some friends—my employer, to be precise—and asked them if they would be interested in funding my book. Billy and Beth Drake of Drake Precision Dental Lab, much to my surprise, agreed to pay for the publication.

So we were off and running. Then came set up and art for the cover. And how would we get it all together? That’s what the project was all about: learning what the problems were and how to deal with them. From that experiment sprang my first chapbook, Steel Womb, and what a mess it was to produce.

I didn’t own a computer at the time. Everything was typeset on a word processor, cut and pasted onto white backer board and shot to film, then printed offset and saddle-stitched. The cover art was a pen and ink drawn by Phil Hodge (affectionately known as Sarge), but it wasn’t the right dimensions. We didn’t know any better. It had to be cropped and shrunk. And, of course, some typos got missed.

We ran about 300 and sold all but a handful by 2000. When we started talking about a reprint, we realized that, because of the way we had produced them, we would have to completely redo the whole book. Furthermore, we were already 2 computers down the road from the original Brother word processor on which all the original text files were stored. All we had were the remaining printed copies of the book.

By then, Main Street Rag had become more than was originally intended. It was supposed to be a hobby, maybe a side business. By 2001, it was basically all I was doing for a living when I wasn’t taking classes to earn a Graphic Arts Degree so I could do it better. A reprint of Steel Womb just wasn’t on the project board.

In 2002, we purchased binding equipment that allowed us to produce better looking chapbooks at a more reasonable price. Still, other projects had priority. The Third Quarter of 2004 was the most stressful period since Main Street Rag became a business. After meeting our commitments, I finally had some time to work on my own work. I’d been talking about it for years and wouldn’t even sell the remaining copies of the first printing because I knew the new version would be different and (hopefully) an improvement over the first.

What you hold is the results. I kept all of the original poems—though most have been tweaked in some way—but I reorganized them, added several that had been removed so the manuscript could fit into the original format, and added some new material that I felt fit the tone.

I decided to go a different way with the cover, but I also wanted to honor Sarge’s contribution to the original chap, so I placed his artwork inside—before the new title page.

Many people have contributed to the molding of this collection of work. Among them are the editors of the magazines who first published some of these poems. Then there is the support team, the friends who have offered advice and feedback along the way: A.A. Jillani, Irene Honeycutt, Gail Peck, Dede Wilson, Don Mager, Jonathan Rice, Shawn Pavey, Barbara Lawing, Rhonda Pumphrey Purvis, Maureen Ryan Griffin, Lynda and Vinnie Calabrese, and, of course, Jill Rausch Douglass—without whom none of this would have been possible.

I hope you enjoy the read. If you stumble across a stray typo, I don’t want to hear about it. I never claimed to walk on water.

Steel is a beautiful thing.
Molten, cast, forged,
blued, tempered, hammered,
stainless, rolled, or galvanized—
even rusted—its character
is unmistakable.
Flexible, malleable,
folded, molded, welded,
shaped by men
and shaper of men;
it is foundation and support,
truss and wrecking ball,
wheel and rail. It is
anvil and shoe, hammer
and nail, sword and sheath.
It is a surgical strike
or the sterile blade of salvation.
It is the heart of the world,
the blood in our veins,
it is creation.

As a young man, my mother’s Granddad
mined coal from holes in the hills near Sutton.
Later, he took his family to Pennsylvania
and went to work in the steel mills. Retired
from Jones & Laughlin after thirty years at
the Homestead Works, then died from lung cancer.
We never knew for certain whether it was work-
related or those raunchy cigars he always favored.

His daughter married a farmer’s son
who built barges down near Brownsville—
another man with calloused hands and dirt
beneath his fingernails that never seemed
to wash away. He lost his mind at a rest home
in Turtle Creek, let it slip away like all those
angry years he spent locked-up inside himself,
mad at everything for nothing.

My father was the first from his side
to go to college. Used to say, “The only thing
that’s really yours is what you know; the only
thing they can never take away.” He worked
for Wheeling Pittsburgh long enough to earn
a pension, woke up one morning without a job
and ten years left until retirement.

He never wrote the novel he wanted to
or spent his afternoons playing golf,
but he doesn’t want for much, except
occasional company. Knowledge makes
a bad companion, but he survives.

His father was a survivor, too.
Collected coal that spilled from railroad cars
and sold it door to door as a boy.
He worked as a janitor most of his life,
knew how to fix anything, had every tool
ever invented, said once, “Any man
can do good job with a good tool,
it takes a good man to do a good job
with a lousy tool.” He was a familiar face
on the sidewalks of Bloomfield and East Liberty,
where he made his rounds twice a day
until a stroke struck him down.

I think of these men as I sit at my lathe
grinding and polishing metal into shiny
frames of sterile steel to hold
someone’s false teeth in place.
I see coal dust gathered in the wrinkles
of my Great Grandfather’s forehead, taste
angry sweat from the heat of Grandpa’s welding torch,
smell the dragon breath of J&L spew into the dark
midday sky along the Monongahela.

And when I hear the raspy voice of
an old man ask me, “What’s the matter, Bud?”
I feel stale air build in my chest, taste
the dust and grit of my generation breeding
all around me, sense my son’s eyes watching
as I work. I look at the dirt beneath my fingernails
and wonder if we will ever
get them clean.

The report of my death was an exaggeration.

I was surprised
to hear of my demise,
that I had died some years ago
when my motorcycle met a motorist
in the middle of the road.

Quite a mess
(from what he heard),
so sad to die so young
and what about my son—
how did he take it?

My brother
related this tale to me,
long distance, as it was told to him
in a neighborhood bar and grill
by a high school friend of mine.

I told him about the last time
I saw that particular friend,
some twelve years past
on a muggy August afternoon
staggering down the street
outside our parents’ house.

He was drunk, confused,
and didn’t recognize me
at first, then asked for
directions home.
My brother muttered something
about some things never changing,
then confessed: he never
told the man the truth.

He said it didn’t seem right
to smudge the memory
of a local legend. Besides,
it made for good bar room
gossip and he had no problem
being related to a dead celebrity.

Be the first to review “Steel Womb Revisited” Click here to cancel reply.