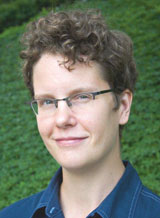 Heather McNaugher teaches poetry, nonfiction, and literature at her alma mater, Chatham University, and is poetry editor of Fourth River. Her work has appeared in 5 A.M., The Bellevue Literary Review,New Ohio Review, The Gay & Lesbian Review,Leveler, and The Cortland Review, and on the radio show, Prosody. Her chapbook, Panic & Joy, was published by Finishing Line Press in 2008. She worked as a house cleaner and barista in Seattle, as a dog walker in Brooklyn, and then got her Ph.D. in English from The State University of New York at Binghamton. While working for the Carnegie Library of Pittsburgh, she almost became a librarian. She’s tried living elsewhere, but keeps coming back to Pittsburgh.

In this finely wrought book of poems, Heather McNaugher shows us with pain and with humor how “we become that space . . . in which we are left.” These poems–systems of hideouts themselves–explore loss of all stripes and the struggle with love–familial, filial, sexual-that shapes our identities and the very futures those identities lead us toward. In plain speech befitting a bard of the barstool, we are told that “trust is for chumps.” Yet the one who speaks these lines is thankfully doomed not only to trust, but to care, to “reach out / and almost bear it.” These poems will help many of us bear up the burden and beauty life inevitably brings to our door.

–Todd Davis,
author of The Least of These and Some Heaven

“The only way through is through” sing the birds, the boots, the parks, the books, and, against all odds, the manic parlor-room’s black radiator sleek as “Lacan’s couch.” With languor and verve, surrender and intellectual combat, these poems fight narcotic self-absorption and push toward love-struck arrivals. McNaugher’s tools and weapons-pen and desk-follow her extravagant bike rides and instructive memories; and the winter cardinal’s sentinel presence accompanies her own full heart.

In System of Hideouts, Heather McNaugher uses voices of elegy to mourn the “self” that never was, the “self” that was, and the possibilities of “self” not mentioned. This elegiac chorus is moving, surprising in its tenderness: “Nothing elates me more/than leaving.” Yet in these smart, layered poems with clear lines, the elegy itself proves to be a hideout, which straddles the line of vulnerability and the lake of elation: “I stand open-mouthed on the road/not getting over you.” There are trap doors and nests of boxes/there is no clear way out of the real joy of this book: the broken-down hideout–“I’m not here for the stillness./I’m here for the grand imperceptible unlatching.”

Until that afternoon I had never
slept like that, like a boy
after sledding. In your twin bed (I had never
even heard of flannel sheets), and later
when you woke me — I had never
been wakened by a girl’s velveteen mouth — later
I would feel for the first time you
lathering with lotion my chapped embarrassed legs.
They were virgins. They sang. They sang out,
bee-stings in snow.

After the memorial service
I take one of the ferns we are given
in honor of you, plant biologist,
nine days dead from cancer.
I load it on my back and bike home.
Roxanne, I have come not in black
but on my bike. You’d smile,
open and approving as a sky
I am not inclined to thank today.
Your children are too young
to be without their mother
and too old to not remember her.
I will not be biking by Linden School this week.

At home I put your fern in the glare of my window seat.
Days later I read the instructions,
their reproach in bold purple letters, a shade lover.
There is little shade in my apartment.
I remember walking in with the realtor,
into the room’s nuclear sweep and saying,
I’ll take it. My first morning there I knew
I’d made a mistake: I’d never be able to sleep
past eight, and hiding in a cocoon
of pizza, Netflix, and winter
was no longer an option.
Already I’ve nearly killed it, your fern,
the only living thing in my apartment
besides me. It’s a big step, me and your fern,
the therapist beseeching a lonely 35-year-old academic
to stop thinking about herself already.
Not unlike the home ec assignment of giving eggs
or bags of flour to teenagers who either drop them
or don’t, but whatever — they’ve given them names
and goofy fond faces, turned the inanimate
into something to lose, or break.
Your fern is not a cat, not a dog, not a child.
Your fern is no mammal. Your fern has no name —
just Roxanne’s. Roxanne’s fern.

I put your fern on the TV
because I am always looking there,
away from the light. On Sunday I watered it.
Too much? Not enough?
Then I left it alone overnight in my dark kitchen.
Roxanne, I have no idea, not one goddamn clue,
what I am doing here, in charge of your fern.
We need you back for just five minutes
to show me how to care. On my own I do it wrong.
When I talk to your fern I scold it,
Do not fucking die on me.
I have decided that this is how it will go,
that on Sundays I will water Roxanne’s fern
and leave it to drain overnight in the kitchen sink,
in the cool kitchen dark. On Monday
I will awaken to it, and begin another week —
the living the first thing I touch.

Once, she painted the living room radiator
black as an iron horse.

It was deep summer, 1989.
She wielded a tank-top and something sharp,
something chemical, to strip it to its bones.
She was a lean, difficult redhead,
my girlfriend’s mother. An economics professor,
she was push-ups and yoga and then,
that summer, she was Jack Daniels and pills
and manic, improbable projects.
She dizzied the paint off walls, the sweat
from my palms.

The radiator was what they call a nine-column, long and low
beneath the gardeniad sill — squat,
but sleek now as an Acura
or Lacan’s couch.

I was 16. I had yet to witness
even once
a single lovely
or indestructible thing.

But now, as I stepped from balmy slate
onto the auburn floor — here at my knee
was stately obsidian hope: a radiator
waiting, cool and irrevocable, for snow.

Be the first to review “System of Hideouts” Click here to cancel reply.