The Boy Whose Hands Were Birds 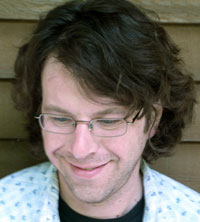 Born 1973 in Brunswick, Ohio to German immigrants, Roy Seeger earned his M.A. in poetry from Ohio University in 2000 and his M.F.A in poetry from Western Michigan University in 2005. He is currently a Full English Professor at the University of South Carolina Aiken where he lives with his wife, the poet Amanda Rachelle Warren, and their small gray dog, Bruce. His chapbook, The Garden of Improbable Birds (2007) is available through Gribble Press, and his poems have appeared in Painted Bride Quarterly, 32 Poems, Mississippi Review, Verse, Gulf Coast, The Laurel Review, Southeast Review, Quarter After Eight as well as other journals.

I can view existence as obsession, an ordering of matter that persists over time. In that sense, these poems take shape around the father, insomnia, love, animals and their often brutal treatment by people, among other recurrent concerns. But Seeger’s interested in looking beneath the flesh of these ostensible subjects, at spirit and its transformations, as the title of the book implies. There is a quiet optimism to these poems, a product of Seeger’s awareness that “between the clay/& the syllable that breathes/what we make/alive” we are, as he points out, “little gods.” Where others see language as limiting, he understands language as that which allows a level of ontological choice. “And/what becomes/clear by daylight—it is/what we fear of ourselves/that gives us hope,/the terrible kind,/the kind that reminds us/we don’t have to be as we are.” This is an engaging first book.

Contemporary poetry right now seems given to extremes, either an arctic cool or a tropical frenzy. Roy Seeger’s first book has to it the heated core of stability—call it voice, call it persistence, call it identity always on the uptake. Whatever their comic masks or alter egos or ego-realities—Golem, the Wolfman, a slapstick duck, man-boy, boy-man, son vexed by father, insomniacal husband—the poems themselves sidestep ironic naiveté and turn towards what this considerable talent calls “inexperience”—the only honest starting point there is for endlessly renewable resolve. These poems instruct not so much by example as by mishap, jerry-rigged allegory, domestic fluke. The result: a poetry that is itself a credible way to live, uniquely.

Their broken teeth & ribs shall,
too, fall to the dust
of abandoned buildings
& take root-each leaf unfurled

another glossy feather,
each forked branch another
wrinkle on a newborn
head-the carrion of memory

an ivory-tipped beak-
& in those first attempts at flight
leaves gather & lift,
stems break from the strain.

And those who emerge wholly,
before leaving, honor
their brethren by feasting
on them (by taking them along).

When man discovered fermented grapes,
populations skyrocketed across the board.
Other inventions followed: communion
wine, Tequila Sunrise, Sex on the Beach,
the self-flushing urinal-each
a miracle of human ingenuity, each
an occasion in itself to drink ourselves
sexy. And after that, procreation
seemed the obvious next step,
the fumble of limbs, the wine-stained
teeth, and whatever happened in the back
alley became a primal conflict:
man versus nature, society, himself…
take your pick. From there, history
is spotted with inventions to return
us to the community’s fold: first came fire,
then someone threw dead things into fire
to change its color. How could three
hundred channels be far behind?
But this is the making I have in store–
one moment: the salt around the rim
of the fruity drink of my life flakes off,
leaving a trail from where I am standing
to the bartender my life will need again
soon enough…And if the world is made
entirely of lovers, then tonight
they are skeletal things–
can’t even rattle without the grace of wind.

A logic to it then–the body,
the way we trust it to betray
this part of you-of me.
Your chance to pull
away from the stove’s orange
coiled element–before
you felt the burning you
smelled its terrible sweetness.
Then the pain.
Then the pulling away. Go.
Remember–while one
of us drove the other
down this dirt road, the radio
lost between stations (& us
also lost), a stillness broke
in the kicked-up dust
& the jazz of competing
signals. My body today
is all static; other days
I am nothing but outburst.
Why do you ask? The brain
says run & electric signals
arrive from some deep place
& make it so; we believe
(truly believe) the villagers
with pitch-forks, who feed each
other’s courage, are another form
of justice. Want to burn down
the mountains themselves,
& depending on who steps
on what, even stones face
judgment. Seems they heard
excessive commotion in surrounding
foothills. Goats were left bewildered
& wandering on their own.
Sheep’s wool grew in darker
& darker, & from up here
the red torchlight reads
like a broke-down discourse.
If these creations were
extensions of the self, I’d dress
mine in my discarded clothing
& send it towards the city
to burn, so the next might draw breath.

Be the first to review “The Boy Whose Hands Were Birds” Click here to cancel reply.