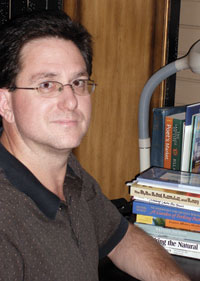 is the 2008 Visiting Writer at Catawba Valley Community College and coordinator of the Poetry Alive reading series in Hickory, NC. His first book of poetry, The Persistence of Faith, was published in 1995 by Sandstone Press. He has received awards for his work from the Academy of American Poets and the North Carolina Writer’s Network. Recent work has appeared in North American Review, Main Street Rag, Pedestal, Georgia Review, Chattahoochee Review, and Cream City Review among others. Born in Greenwood, SC, he has lived in North Carolina, where he completed his MFA from UNCG, for over 20 years.

The Fractured World is a courageous examination of the long term effects of child abuse in our society. Owens’ poems are at times heartbreaking, at times humorous, yet always triumphant.

Scott Owens’ poems grab the reader by the throat from the opening line and don’t let go, unspooling down the page with verve and startling moments of insight and imagination. He’s the real thing.

Nothing prepared me for the immediacy and yet intimacy of the poems in Fractured World. Nor the intensely painful revelations about our woundedness and vulnerability, not to mention our despair at being turned into empty vessels by the “game” of a world divided into sides always at war with each other. As “Taking the Field” declares, And this is the way/you play the game/…you are nothing unless you win, says the black booted man who draws a line and tells you, whoever stands/across that line/is your enemy…/and you must hit him/and you must beat him/until he falls… The irony in these often bruising poems is that the winner in this game becomes the lost one, the numbed and empty one who moves through his world either enraged or numbed. Scott Owens has given us a powerful, disturbing look at our contemporary fractured world.

You’ve seen me here before.
Every game I watch from field level,
Section K, Row 12, Seat 3.
I’m the one with the Braves
cap turned backward, one hand full
of nuts, the other scratching balls
and strikes on the back of my program.

I could be anyone for all you know,
your neighbor, your banker,
your daughter’s teacher, your lover’s
lover. I could be the owner of the car
parked across the street from your house,
the man who steals scraps from your garbage,
or the man who called at 2 A.M.
and hung up when you answered.
I could be the one who found the change
you dropped on the steps coming in.
That change could be paying for these
peanuts, this program, my bus fare home.
I could be the man who canned the beer
you’re drinking, or the one who read
your tax returns last year and ignored
the small mistakes. I could be
the man who pissed on second base
leaving that stain across the white corner,
the man who wrote “Fuck Me” on the back
of the seat you’re sitting in,
or the one who wrote my number
“Call Me” on the bathroom wall.

I come here to watch the people,
the woman with pins in her hair,
the man whose spit sits on his lips
when he speaks, the boy who can’t
keep his hands off his girlfriend’s
thigh. At night I watch the nighthawks
dancing in and out of darkness,
always there when the lights come on,
appearing from behind the blue roof,
the white rafters, the gray racks
of lights. I come for the sounds,
the crack of the bat, the shouts
of the vendors, the thousand conversations.
I come to escape the absence
of home, the blank spots
on the wall, the empty
chairs, the lack of voices.
Norman in the Window, His Eyes Like Shattered Glass

Inside or out you know what has just happened.
The bowl has grown wings and flown
into the wall. The table has lost two legs.
The door has slammed shut. There is blood
on my mother’s face. There is blood
waiting in Norman’s hands.

Norman is in the window.
What I mean is, his hand is in the window.
His common sense came back when he saw
the jagged edge rising just below
his wrist, and he left his hand where it was
uncertain whether to draw it back, slowly,
or grit his teeth and dare the life he’s living.

All she wanted was to keep him here
and now it is she who is leaving,
her children gathered beneath the apron
of her arms. Norman is in the window.
He can see from here the red shape
of her leaving. He can hear her little sobs
through what is broken open. He can see her arms
fluttering like wings around her children.

The welt on her face is already taking
the shape of a hand in a window.
Norman is in the window. He can tell by the pain
in his hand that he is not dreaming.
Even through these broken panes
he can see the last look back.
Even through eyes blood-streaked and cracked
he can tell the skin he’s broken will never heal.

So Norman Died, Of Course

So he left his fingers
on the ground and they
turned into earthworms
and wriggled away.
And he let his ears
fly free, the wings
they’d always wanted
to be. And he let his eyes
roll into the ocean
to become pearls
held tight in oysters’
clamped shut shells.
His hair spun itself
into spider webs
that stretch across your face.
His skull opened itself
for chipmunks and night things
to nest in. His face
became a flower with one eye
that winked open
in the morning, winked
closed at night.
His leg became a persimmon
branch, its unripe fruit
turning your mouth
inside out. His heart
hardened into stone.
His bones picked themselves up
and wandered to the river
and threw themselves in
and flowed downstream
until a beaver gathered them
together for his dam.
His lips turned into blades
of grass that whistle
with every breeze.
His arms transformed
into wild lime trees,
covered with spines
and yellow fruit,
inviting, forbidding,
letting nothing go easy.
His tongue flew into the wind
and was never heard from again.
His skin had grown so thin
it easily changed into birchbark
and started peeling away.
And his hand,
his hard right hand
which never learned to hold
anything gently turned into
a leaf that held wind,
rain, sunlight upon it,
then let everything go.

Be the first to review “The Fractured World” Click here to cancel reply.