The Lost Tribe of Us 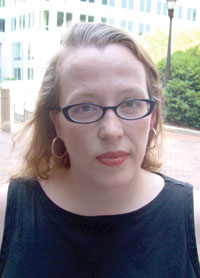 Heather Davis
Heather Davis holds a B.A. in English from Hollins University and an M.A. in creative writing from Syracuse University. She attended the Bucknell Seminar for Younger Poets, and is a winner of the 1991 Hayden Carruth Poetry Prize at Syracuse University, a Larry Neal Writer’s Award, and the 2007 Arlington County Moving Words Poetry Contest. Her poems have appeared in Beltway Poetry Quarterly, Cream City Review, Poet Lore, Puerto del Sol, and Sonora Review, among others. She works in international public health as a communications manager and coordinates a women’s writing group. She lives in northern Virginia with her husband, the poet José Padua, and their daughter. Her parents and seven younger siblings all live within several hours’ drive.

Heather’s poems skewer the soft white underbelly of America’s walking dead. She protects her own, but rips the skin off their enemies and turns it inside out–and all this in words that are not cliches. Think of how impossible that feat is in these replicating times.

In The Lost Tribe of Us, Heather Davis offers her readers vivid, occasionally comic, more often gut-wrenching poems that, in the first part of the book, engage with the lives of members of a large family-all the vulnerabilities and pathos of poverty: repossessed cars, joblessness, leaky roofs, too small houses, second-hand clothing and teen-age pregnancy. Later, the scope of the poems widens to include aspects of the world at large: war, terrorism, rape, imprisonment, incest, mental illness, much of what troubled flesh is heir to. But to say simply that the poems are about big subjects that really matter is not to do them justice. They are invariably characterized by exquisite formal control, the always lovely deployment of language that is a delight to the eye and ear. The Lost Tribe of Us is a wonderful first book by an exceptionally gifted poet.

Mother, on the news of your pregnancy,
I thought of one thing:
how the pleasure my lover and I build barehanded
is nothing compared to your architecture,
the house of your body renovated,
full again after seven children;
and I remembered how, before I left home,
every detail of the place looked back at me,
foreign as an ocean floor,
the shadows of pines delicate as coral
against white clapboard,
the foundation settled like a sunken ship,
steeped in unnatural, seeping light.
I wondered how long old timbers can stand
secure in their sockets of earth.

Home from a friend’s, I let the limp kitchen door
thwap shut. The air is cool, a lake in autumn.
I swim through rooms flipping switches.
Your absence floats up wide-eyed, slick
as a fish. Where is the voluminous nightgown,
its folds shimmering like waves, where
the pale, elastic limbs? I expect
the soft couch creaking, the friction
of skin against skin as you turn and shift
to see who it is coming in so late.
I want to watch the screen full of faces, red lips,
feel the nudge of words rising like bubbles
from the blue box. But there is only
the hollow running of the toilet, cold
watermusic. I imagine you suffering
the hard bed upstairs to be with Dad, breathing fast
through flapping, fluted gills, beautiful, submerged.

are like phantom arms or legs.
They fool you into thinking
your body is bigger than your body.
They are the ghosts you carry, so real
you could use your sister’s arm
to lift a bowl of cherries,
your brother’s leg to bound up stairs.
Even your organs throb in duplicate
and your voice unrolls in tones
you know as yours, but not yours.
For better or worse, these parts are
the mother and father who get cut off,
but do not leave you, the siblings
you must leave behind, but who
refuse to stay put, all of us attached
for longer than we realize,
and at the most embarrassing places.
Showing Scars

Stand at the jukebox, contraposto,
shoving warm coins into a slot.
Some man will wobble close,
stomach protruding smooth as an egg
from his untucked workshirt.
In a hazy room lined with breasts
and yeasty breath he will want
to tell you about his wife, his life,
the scar on his arm. Sit down
with a cough, thoughts scattered
like pool balls. His eyes will be
glazed and thick-lashed, beautiful
as a woodland animal’s. Ten
years in the pen for assault
with a deadly weapon and
he would do it again. Where the bullet
entered his own flesh, where he
accidentally shot himself, will be
a hole, the mark of his misdirection.
Where his beer spills will spread
a dark stain. Touch a finger
to the hardened wound. His buddies
will turn toward your corner,
then sidle over from their stools
with nudges and laughter.
Lean in slowly, whisper oh, my God
while each in his turn shows off
a limb and what it’s missing.

Be the first to review “The Lost Tribe of Us” Click here to cancel reply.