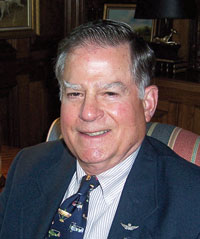 John Ottley, Jr. is presently retired, but once managed two orthodontic professional associations. He was graduated from Davidson College (1953-BA, English) and Columbia University (1954-MS, journalism). He edited and published Midwest Poetry Review, earned several Army decorations and badges and is the only non-dentist to receive the Southern Association of Orthodontists’ Distinguished service Award. Born October 8, 1931, in Atlanta, he is married and has four children, eight grandchildren, and three great grandchildren. He was president of the Georgia Poetry Society and treasurer of the National Federation of State Poetry Societies.

John Ottley, Jr., manages, consistently, to do in his poems that which is an essential part of a poet’s job: to make something familiar new. He does this with a great gift for metaphor–the only thing about writing poetry that can’t be taught, said Aristotle–a sly sense of humor, blazing clarity, and a deep love of the natural world, as well as the world less natural, the world of humans.

John Ottley, Jr. writes about the old things: war and love, misery and joy. But he writes with a grace and verve that makes these subjects new again. There is something both timeless and timely in his verse and the deadly fears that he names.

YELLOW HAS ITS MOMENT

Scarlet, burnt sienna, and tangerine have fallen.
In this November morning,
on the cusp of night’s becoming day,
leaves of hickory, pin oak, and sweet gum
flare in the sleeping forest
like splotches of citron flung by a madman
against a drab zinc canvas.
This is yellow’s moment.

The sun peeps over the edge of the world
like a carpenter’s forehead
as he feels along the top shelf of his cabinet
for a glass jar of nails.
The first rays shine on the timber
like a nervous boy’s flashlight beam
poking between trees
to chase away things that may lurk
in ominous shadows.

The gods have granted that
yellow leaves may drop last,
perhaps because they alone
remember the color of the sun
and of fire.
Dark lie the days ahead
and men who come into the wood
in search of big deer
will walk on gilded carpets
rustling underfoot.

If you believe what they say,
we will find streets of gold in heaven,
but heaven is afar,
a distant finish line
for those of us who played about like hares
and now sprint desperately
to pass tortoises.
Perhaps better for us
to stop
and exult here
in this moment of yellow.

UPON NOT WEARING GOLDEN SLIPPERS TO THE RIVER

I never joined the church
of flycasters who hold
that heaven can be attained
only if worshippers are in the creek
as night gives way to pearl dawn.

Often the sun is almost overhead
when I ease into the water
to pursue rainbow trout.

The first commandment:
Thou shalt fish whenever thou canst.

We never expect Final Judgment
to occur on any particular day.
Otherwise, we would cower in bed.
Worse, it would create snarled casts,
line caught in trees,
and landing nets fumbled at the moment
worthy fish contemplate surrender.
Instead of angling, we might rush out
and do something really foolish
such as try to save the world.

On one especially high holy day
a mule kick hit my rod.
The leaping fish
Scattered water droplets
like the shower in a five-star hotel.
He churned upstream like a submarine
with an unlicensed teen-ager at the helm.

I measured him, but it would be the sin of pride
to reveal the exact length.
I released him for the congregant who would follow.
Fish smell and slime lingered on my hands.

I took three such trout under a clear sky:
a trinity deserving of my faith.
Only a remembrance of winter annoyed
my brown, moth-eaten fishing sweater.

I offered thanks that it was not a day
when moody trout refuse
a man’s best presentations,
prayers go unheard,
and disappointment shoves the preacher aside
to take over the pulpit.

Had Gabriel blown his summons that afternoon,
I would have begged a loving Deity
to show proper mercy by allowing this penitent
just one more cast.

The sixth deadliest fear
Is being lost in the woods at night.
Everything looks the same.
Nothing looks the same.
Fear grips you like a hairy gorilla.
Sensible thoughts crumble like saltines.
You’ve no sense of direction.
Your flashlight is a brittle lance
jousting timidly with a black-clad ninja.

Wait, moss grows on the north side of a tree,
but, where will north take you?
You point your light:
moss is on all sides of the trees.

Don’t panic.
They taught in Boy scouts to follow a creek downhill
to civilization.
The one you select leads to another
and another-all running the wrong way.

There’s a landmark:
third time you’ve passed it.
Admit it, you’re stumbling in circles.
You can’t admit it.
You lunge on, sweating despite bitter cold.
Your mouth gags with cotton.
Too tired to continue, you collapse, sobbing.
If nobody comes, you’ll go into shock and sleep
never to awaken.

The seventh deadliest fear is being lost
in a job you hate,
working for a boss whose cleated shoes
leave bloody holes in your back
as he sprints for the executive suite.
One day melts into another with nothing accomplished.
You double down, work harder,
keep passing the same waypoints.

You get so tired the only way out
is a long walk in the woods
at night.

Be the first to review “The Seventh Deadliest Fear” Click here to cancel reply.