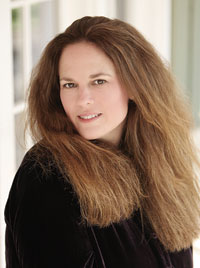 Maureen Sherbondy grew up in Metuchen, New Jersey, and now resides in Raleigh, North Carolina, with her husband and three sons. Her short stories have appeared in numerous publications, including Southeast Review, Stone Canoe, The Chapel Hill News, and the North Carolina Literary Review. One of Maureen’s stories was selected as a runner-up in the William Faulkner–William Wisdom Creative Writing Competition, another story won the Piccolo Spoleto Fiction Open. Her poems have won first place in: The Deane Ritch Lomax Poetry Prize (Charlotte Writers’ Club), The Lyricist Statewide Poetry Contest, and the Hart Crane Memorial Poetry Award from Kent State University. Main Street Rag Publishing Company published her first chapbook, After the Fairy Tale , in 2007 and her second chapbook, Praying at Coffee Shops, in 2008.

Maureen Sherbondy’s new book of short stories, The Slow Vanishing, showcases the work of an unfailingly entertaining writer with a gift for dark humor and lots of tricks up her sleeve, but always in the service of deepening the reader’s understanding of the endless variations of human desperation that often haunt the most conventional of lives. Her adept use of the bizarre descriptive detail and quirky conversational tidbit enables her to create memorable characters that we end up rooting for, often within a very few pages, or even paragraphs, in the case of her shorter pieces, no matter how hapless their lot. These stories crackle with odd energy, and often leave the reader breathless with surprise, horrified and laughing at the same time.

What a wonderful collection this is. Maureen Sherbondy’s The Slow Vanishing is remarkable for its abundance, its variety, its range, and its sheer imagination. There are long, serious stories like “Opossum,” which begins the book, and “Last Respects,” which ends it. There are comic stories, very short stories (flash fictions), and in all of them Sherbondy’s gift for vivid, sharp imagery and telling detail shines forth. Everything seems to vanish-children, mothers, houses, comedians, body parts, husbands, even punctuation-and all this vanishing asks us to think about life without that which has vanished. And we do think. We laugh, we worry, we think, and we read on, because we want more.

Off-beat stories with unexpected endings. Life’s ordinary problems intruded on by the bizarre. The Slow Vanishing has a mesmerizing, magical effect.

I handed my keys over to Worry. He was a burly man with Brillo hair that no woman would ever want to run hands through.

Worry took me on a wild ride.

“Watch the curves!” I yelled, holding onto the plastic pull in the back seat, as the car screeched and raced around the corner, spinning dirt and leaves into the air.

“Go with it,” he said, eyeing me from the rearview mirror.

“Objects in the side view mirrors are closer than they appear!” I yelled.

He stuck his thick arm out the open window and knocked the mirror off with one fierce punch. When he braked suddenly, for no apparent reason, the lumber truck following too closely knocked into our bumper. I screamed like a cat in heat, as lumber from the truck unbuckled from its ties and unloaded in a loud jumble on the side of the road.

“Are you crazy!” I shouted, hitting his headrest. “Too much Starbucks? Crack?”

“Hey, you’re the one who gave me the keys. And your hands were shaking when you handed them over. If anyone is hyped up on something – it’s you.”

He turned to face me, staring me down. His eyes were so dark it seemed as if there were no pupils. Then Worry floored the gas pedal and began driving with his knees. I closed my eyes, said a prayer, but was jolted again when he raced through orange cones, knocking down a Do Not Enter sign.

“Give in to me,” he advised, handing over his whiskey flask.

“Let me out! I can’t do it. I want the keys back, my life. I’m tired of you, I’ll learn how to handle daily life. I’ll do yoga, meditation, Reiki. I’ll take warm baths scented with rosemary and wear those special soothing stones around my wrists.”

“Oh, you think that will work! Huh!” He lit a stogy as the car flew through a flimsy gate, shot over a cliff, landing in water with a loud splash and thump.

“We’re going to sink! Who will take care of my three children? The dog? My house? My sick mother?”

The car continued drifting for an hour until it reached an island. A turtle greeted me with a slow crawl; palm trees lined the entry point and led to a tropical garden filled with ginger, orchids and hibiscus. I left the floating car and followed Worry along the dirt path. Parrots showed off their multicolored feathers in front of my eyes, and I felt my heart slow down for the first time in years.

“Here are the keys. Stay a while and chill out. Don’t go home until your worry lines vanish, and your blood pressure goes down.” Worry patted my back with his large hairy hand; then he vanished into the garden singing reggae songs, one which sounded like Don’t worry, be happy. I followed the line of cigar smoke with my eyes until I could no longer see the gray cloud.

I spent a year on the island, just breathing, singing, and resting. Then I climbed in the car that was docked to a palm tree. The car floated back to reality. On the road home, chunks of worry began to appear in my car. Are the kids all right? Who’s been watching them? Who’s been paying the bills? I gathered the worries like beads, threw them out the window, hoping I could leave them behind. As I took a swig of whiskey and bravery from the flask that was still in the car, my heart sped up when blue lights flashed in my rearview mirror, the scream of a siren filling my ears.

“You’re littering ma’am. I’m going to have to fine you – $200,” the officer said in a monotone voice after I stopped the car.

“You don’t understand!” I hit the dusty dashboard with my fist. “I’m trying to relax.”

But it was too late. My heart was now beating so fast it spun out of control, a hole opened in my chest, and I watched as my heart swirled out of me, out the car window and into the sky.

Bit by bit, Sarah vanished. It began slowly — a swatch of fingertip tugged off. Everyone wanted something: her five children, her corporate husband, the in-laws, the neighbors, her two terriers, the PTA, her four younger sisters, the church parishioners. They were the takers, and she was the giver; this is the way it had always been. She barely noticed the initial throb of missing fingertip. The dull pain was interrupted by the disappearance of the small toe on her left foot, removed by her husband. Then, an ounce of flesh above her hip, which, really, she didn’t mind, as there had been so much extra flesh since that fourth pregnancy. The removal of flesh was like being gnawed by a very large rat. Chomp chomp. First she swatted the hand of the taker, a PTA parent this time; then she accepted this loss and waved goodbye as the ounce of flesh floated out the open window.

Phones rang endlessly with additional requests: to bake two dozen cupcakes for the school bake sale, volunteer for the book fair, organize the church charity talent show. Then the takers became ruthless. They descended, a swarm of hands and teeth. A finger, wearing her wedding band, floated away from the four-bedroom brick house, and then a large toe left the suburban cul-de-sac. Her slightly bulbous nose sprayed with tiny freckles drifted into the sky, a loss which made smelling the burning cupcakes difficult. She saw twenty freckles in the night sky lit up like red stars.

At night, achy, feeling scattered and lost, she closed her eyes (still intact, she had covered those with palms, no fingers) trying to find a dream where only givers lived. But, piece-by-piece even dreams parted.

When the children and husband and in-laws and PTA and church parishioners searched for Sarah, to ask just one last little favor, all that remained was a stain – a perfumed outline of who she had been.

Be the first to review “The Slow Vanishing” Click here to cancel reply.