Three Cubic Feet is a story about the body–how it can be broken, how it can be violated and sometimes used to violate others. And yet, we go on. We heal, and life continues. Theo Williamson lives in Springfield, Missouri, an oppressive town hostile to change–no place for a gay teenager. His family has good intentions, but Theo’s father is recovering from a car accident, and his stepmother won’t give him a moment to himself. And Theo has guy problems–the closeted older man he seduced wants nothing to do with him, and Theo’s best friend Jonathan isn’t interested in anything more than friendship. When Jonathan’s father turns violent, Theo must decide just how far he is willing to go for love. 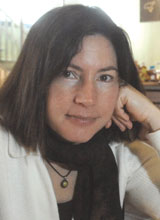 Lania Knight has a PhD in English/Creative Writing from the University of Missouri. She currently teaches creative writing as an Assistant Professor at Eastern Illinois University and is the Nonfiction Editor for Bluestem. Her work is forthcoming or has recently appeared in New Stories from the Midwest, PANK, Patasola Press East Coast Women’s Anthology,Jabberwock Review, and Midwestern Gothic, among others. Her author interviews appear in Poets & Writers, The Missouri Review, and Center. She misses the Ozark Mountains. She blogs about writing, dreaming, teaching, and the strangeness of living in a cornfield at www.laniaknight.com.

Lania Knight has an uncanny sense for rendering the emotional life of a teenager within a page-turner of a story. Three Cubic Feet is moving and yet spare, restrained, true to life.

–Sheri Joseph,
author of Stray and Bear Me Safely Over

In Three Cubic Feet, Lania Knight renders a touching and violent coming of age. Gay and straight, her characters leap off the page and grab our hearts.

— Eric Goodman,
author of Twelfth and Race
and Child of My Right Hand

Lania Knight’s Three Cubic Feet reveals the complex emotional distances that must be navigated within even the greatest intimacies. With sensitivity and probing insight, she dares to map the most treacherous terrain of all–the distance between who we are and who we want to be.

–Pedro Ponce,
author of Homeland: A Panorama in 50 States

Read Lania Knight’s book because it’s compelling and direct, and scathing in revealing the older generation’s cruelties toward the sexual adventures of the younger. Read it because it’s a beautifully rendered coming of age romance. But most of all, read it because, when you are done, you will know the brave, suffering hero so well that you can feel—truly, madly, deeply—exactly what he feels.

–Moira Crone,
author of The Not Yet, Dream State,
and What Gets Into Us

My dad and I both stare at the rain fly stretched between our hands, its strange angles refusing to be reduced to a simple square. “Okay, Son, let’s fold this thing,” Dad says. He gives it a shake. “I think Matt had the right idea, leaving a day early.” We stand there a moment, and he releases one corner of the rain fly to scratch beneath his faded Hawaiian shirt. Then he is immobile, thinking. “We could be home by now,” he says.

Dad lets go of the rain fly and mumbles something.

I hum to keep from speaking. I fold alone, and then I begin unhooking each pole from the tent, pushing the tubes through the pockets along the seams.

That tight thing starts up in my stomach, the thing that doesn’t go away until I can be by myself. I toss the bundle of tent poles to the ground.

He watches me. “You aren’t… Don’t tell me you had a birthday.”

He takes off his glasses, and I look at the scar below his eye, the one that’s curved just the same way his glasses are curved, the scar he got from the car accident that almost killed him fifteen months ago. He wipes his forehead on his shirtsleeve and then cleans his glasses in little circular motions, squinting.

They all forgot my sixteenth birthday.

I start folding the tent by myself while my little sister Samantha and her best friend Kate argue about their swimsuits, and Della, my step-mom, stands at the propane stove perched on the end of the picnic table, stirring the oatmeal, telling the girls to be nice. I’m ready to leave and be the person behind the steering wheel. I need to practice. Florida is almost over, and four states away, my best friend, Jonathan, is waiting back home in Missouri.

“Speed it up, you two!” Della calls out to my dad and me. “Breakfast is ready!”
My dad looks toward the picnic table, in a daze. He stretches with his hands on his lower back and pulls up one knee, then the other, leaning against a tree to keep his balance as each foot lifts five, six, seven seconds. The pain migrates across his face, escapes his mouth with a low groan. But he doesn’t complain. He is alive, and that is enough. “You’d better eat while you’ve got the chance,” he tells me.

I can’t be angry with him for not remembering my birthday, for not making things right. I start folding the camo-green tarp, and he finds his cane and shuffles away. “Where are you going?” Della calls to my dad, and he waves her off with his free hand. She turns to me. “Let’s eat,” she says.

I gather up our folded camping equipment and watch my dad disappear on the other side of a rise, drifting among the palmetto bushes and live oaks of the surrounding campsites. “Alright,” I say.

Della isn’t really my mom. My mom was the plump, huggable type. Della is skinny, and she teaches junior high math. My mom was a botanical illustrator, an artist. She died of breast cancer when I was six. She was still nursing my little sister Samantha. I remember what it felt like. I remember hating the baby girl in Mom’s arms, thinking Samantha gave my mom the cancer. The last real memory I have of Mom is her body, shrunken up like a bird, swallowed whole on the queen-sized bed Sam sometimes still got to sleep in. Everything hurt when I touched Mom, even when I just touched the old quilt she kept folded at the foot of the bed. Every bone in her body ached, she told me. So I didn’t touch her, even to hold her hand and say goodbye when Dad said it was time. Of course, that was stupid and selfish of me, but I was only six years old.
I wedge against the van, alone for a minute, holding the tarp and tent and rain fly to my chest. A breeze stirs the needles of the jack pines nearby, ruffling the surface of the pool of water at the base of the trees’ roots. I inherited all of Mom’s plant taxonomies when she died, so I know the names of all the trees and bushes and flowers from here to the Ozarks in Missouri. I can’t help but notice the plants, their names popping into my head without my asking them to.

I’m tired. I open up the car top carrier, put our stuff inside, and then look in my backpack for Heart of Darkness, the book I have to read for British Literature. I stare at the cover and think of Matt, the new instructor in Dad’s department at Missouri State, how he stopped at our campsite on his way out yesterday. I was sitting in the hammock reading my book when he shook hands through the car window with my dad. Matt looked at me. He waved and said something like Take it easy. I said Sure and watched him drive away.

I wish Della had never invited him on this trip. So what if he’s new and lonely.
“Would you stop already?” Della says. She is standing behind me, holding a steaming bowl of oatmeal. She is standing too close, and her presence feels like the confinement of a short, choking leash. The closer she gets, the more I know that she will be the one to figure out what I did to Matt. I take the oatmeal from her and eat it and try not to puke it up.

* * *
Later, after we say goodbye to all of the families who traveled here with us from Missouri and who are now ready to leave for home before we are, after we stuff every last cooking utensil and dirty sock into the van, I decide to remind Della that I need to log more hours of practice driving.

She tells the girls they can go play one last time at the beach, and then I drop it on her.

“Do you think I could drive home?” I say.

The tears well up instantly and spill over.

“I’ll make it up to you,” she says. She touches my shoulder–I let her–and she hands me the keys. She doesn’t like making mistakes.

If you would like to read more of Three Cubic Feet by Lania Knight, order your copy today.

Be the first to review “Three Cubic Feet” Click here to cancel reply.