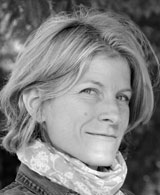 The poems of Lisa Allen Ortiz have appeared in Zyzzyva, The Literary Review, Comstock Review, Crab Orchard Review and have been featured on the site Verse Daily. She was a recipient of at 2007 and 2008 Dorothy Sargent Rosenberg Prize. She lives in Northern California with her husband and two daughters.

Lisa Allen Ortiz makes matter-of-factness into music. In these imaginative meditations, she explores the intimacies and ironies of relationships both poignant and perished, taking not only the measure of marriage but of “the distance between here and there,” to find “the width of wanting.” These are poems whose relics are at once fantastical and familiar, secretly hopeful and sensuously rich, that illuminate the profound, tenuous truth we may always have suspected, but before reading Lisa’s poems didn’t quite know how to voice: we are “lightly connected/to everything.”

On an island of sugar sand
we are bone thin.

I wait up for you. In the morning
my eye sockets are two dredged harbors.

The Buddha said spread your heart
like a rug for company. Sweep it.

I remember everything: the rocking does not stop
even after months on the mountain.

Were I farmer, I would grow seas
of flowers and grains: you could row home.

I close my eyes and the boat tilts. You
hold me as we go under.

The Tortoise Survives the Fire

He’s at my friend’s house now.
In the driveway, we watch him
with our arms crossed, the beer-stained
winter light seeping through fence, vines.

He’s the size of a coffee table
80 years or so they say, dumb-ass slow
but with cinder-burn eyes.
He eats nasturtiums. We have our health,
he says to us. Suffering and the end of suffering, he says.

The house was burned to rubble, ash,
skeletons of charred beams. The humans survived
because they were out. The bird
(exotic, singing, caged) died. A firefighter
found the tortoise in the ash, walking out the melted

garden gate, all blessed in soot.
He said: you think that was hot,
let me tell you about this South American tortoise I knew
in ’68. Not really. There’s nothing glib
about survival. Is there.

So either it was a miracle or a thick shell.
The tortoise shakes his head.
Everybody wants wings, he says, but not in a gloating way.
I go home. He’s not my problem. From my window
I see my children running in from school, their backpacks
bouncing. It is January. They are young.
I have lots of time.

I have decided against the castle
and I leave it empty.
In the gatehouse, the ticket taker
is hunched and picking at his nails.
I leave behind the bereft queen
the perfidious king, they way she does him in
with scissors, the line about mercury and blood.

Instead I pull in circus imagery:
elephants with satin ribbons, sequined women,
clowns with carnivorous mouths,
and behind it all the broke-down trailers
where the real acts happen.

I will take out the stanza about acrobats
an overreaching metaphor for love
the way it dances on tiptoe
how the fall is choreographed
how I should have known.

I will take out your name.

I will leave in this part here,
in which the speaker stands alone
in the empty lot, dry grass and plastic cups.
She creases the program between her fingers.
She kicks up tiny torrents of dust;
she is glum but satisfied.

Be the first to review “Turns Out” Click here to cancel reply.