UKULELE and other poems 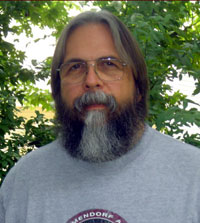 Jonathan K. Rice
Jonathan K. Rice, originally from Indiana, grew up in south Florida, and presently lives in Charlotte, North Carolina with his wife and family. He received his Bachelor’s degree in Religious Studies from the University of North Carolina at Charlotte, and also did graduate work at Erskine Theological Seminary and Gordon-Conwell Theological Seminary at Charlotte. He is the editor and publisher of Iodine Poetry Journal, which he established in 2000. He co-edited the anthology,Celebrating Life, with Lynne Payne in 2002, and authored his first chapbook, Shooting Pool With A Cellist (Main Street Rag, 2003). His poetry has appeared in many periodicals. He has also hosted regular poetry readings in Charlotte since 1999.

He climbs the stairwell
through echoes of his own steps
and finds the unsecured roof hatch
he noticed the day before.

Emerging with cardboard wings
fashioned from a large appliance box,
he perches on a ledge three stories up,
an expanse of bushes and grass below.

A busy road lined with oaks
draped in Spanish moss
surround the clearing before him.
Shouting poetry he leaps,

glides momentarily, then plummets
to a cushion of boxwoods
that pierce his body with freshly pruned
branches that break his fall.

His countenance unscathed
he soars to the moon and back
as he lays broken and dazed,
one wing labeled, “This side up.”

Letter From A Deceased Editor

In the event that you have received this letter
I probably had accepted some of your work
for publication,
or I may have received your submission
and had not read or responded to it as yet.

I am dead
and this is a form letter I composed,
and gave to my wife to copy and send out
to those of you interested in my magazine.

Because I am dead
I am unable to comment on your work,
however, please feel free to submit this work elsewhere.
Send cards and letters to my family
at the above address. In lieu of flowers,
contributions should be made to your favorite charity.

Along with me
the magazine is also dead
If you are a subscriber,
too bad.
My wife can barely afford to bury me.
Please leave her alone in her grief
and forget a refund.
You’re lucky enough to get this letter.
Manuscripts will not be returned.

Ceramic birds are on the mantle of his fireplace
among cups and plates from places like Niagara Falls
and Miami Beach. He likes to sit on his flowered
davenport smoking Hav-A-Tampa Jewels,
using the seashell ashtray he bought in Key West.
He talks about his days in the military,
the letters from his wife, the hope and consolation.

He has a brother in Mississippi,
but they don’t write or call each other.
His wife has been dead for three years,
but things are looking up, he says.
It’s spring and the azaleas are blooming
by the front door. His health is good and he knows
how to cook. He counts the knick-knacks on the mantle
and says he’d like to get some more. Last week he found
a teapot at a yard sale for the Elk’s Club.

A decent retirement check comes in the mail,
as he sorts through bills and ads.
There is a letter to his wife, and out of habit, he holds it
to a light. She’s been approved for credit,
up to ten thousand dollars,
and he’s still paying for her funeral.

Be the first to review “UKULELE and other poems” Click here to cancel reply.