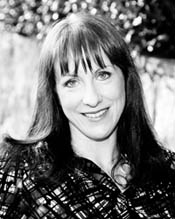 Alice Osborn
Born in Washington D.C. the winter after Watergate to a French mother and a civil servant father, Alice Osborn came of age in Charleston and Myrtle Beach, South Carolina. In the Lowcountry she learned how to hoist a spinnaker, stop a shoplifter and complete two marathons. She is a graduate of Virginia Tech and North Carolina State who served as an ROTC cadet, waitress, retail manager and high school teacher. Osborn uses all of her experiences now as an instigator of writing happenings and as a creative writing teacher to students ages 9-90. Her work appears in Raleigh’s News and Observer, The Pedestal Magazine, and in numerous journals and anthologies. She lives in Raleigh, North Carolina, with her husband and two children. Website: www.aliceosborn.com.

Alice Osborn convincingly shows us how a narrative poet can expertly craft in rich detail and with the occasional dry wit scenes of family tranquility against the contrasting darkness of a suicidal mother whose “love and loathing” she cannot “patch” like silver aircraft skin and, as a child, whose “hand she never holds.” But especially poignant, in a different vein, is the poem “Challenger 7,” in which the tragedy, both national and personal, is elevated to a cosmic/spiritual domain where the Pleiades mourn the tragedy in the astronauts’ own “living room!” There are many scenes in this most intimate collection that will live long with the reader.

How easy and pleasing to sink down into the settings of Alice Osborn’s narrative poems. From childhood to motherhood, sights and sounds of relationships, kitchens, children, varied male characters, a French mother-every poem a surprise menu item as she mixes commonplace with complexity. Often, her poems tantalize with the suggestions of more to come in detailing a relationship or situation. There is honesty in all these poems, an affinity that readers can appreciate and associate within their own realms of life experiences.

I love Alice’s poetry. She gives me thoughts I’ve never thought, and dreams I’ve never dreamed. She uses words like a master potter–molding the clay of the mind into vessels that hold not things, but life, place, and time.

Reading the first poems in this collection, you note how Alice Osborn collects precise facts, then applies imagination and technique to give them newer, stronger meaning. When she deals with the daily-standing in the K-Mart Line, remembering azaleas, wearing a blue wool coat-nothing seems merely daily. Everything from sipping coffee (” the nectar / without a god to call your own”) to Myrtle Beach (“: the land of hemp necklaces, tongue piercings… Marilyn blonde hair,”) becomes new again in her often wry, always honest vision.

Did the Pleiades convene,
heads covered, arms linked
seventy-three seconds after liftoff
on that freezing January Monday
when the O-rings fried like onions
at Cape Canaveral?

Did the seven sisters mourn in their living room
the seven hunched in the cockpit’s
two minute and forty-five second freefall
back to earth?
Their fall lasted twice as long as their flight.

Seven icicles hang from the booster rockets,
sharp enough to slice arms, shattering
bay windows overlooking the Banana River,
leaving only bald orchids, their seven petals
falling on ash and snow.
The Y in the pluming acacia tree
carried the charred mourning doves,
the astronauts huddled
in their last moments.

Judy keyed Bach’s Requiem on her baby grand,
and Christa wondered if he would remarry another.
Dick twisted his cold knuckles
around his grandfather’s wood stove
while Ron saw the mouth of the Annan River
consuming him like an eel. Greg wasn’t
with them anymore.
No one wanted
to be named after a crater on Venus.

During the long search, the recovery team
found only six,
losing the blue astronaut suit as quickly
as they found him.

The Pleiades prayed,
for the divers to see

a scallop boat gathering
the last one home.

He wanted to do it himself
because that’s what real men do.
In a year or eighteen months, my father sees
a white-walled workroom
sanctuary, a full bath
with a pedestal sink.
My parents said a finished basement
adds re-sale value;
a home for the future, not the present.

Contractors worked for a day or three, nothing
long-term since
Dad could do all the work himself.
But not on weeknights and weekends-
you don’t use vacation time to do manual labor.

That fall my father took a day off,
toenailed the studs and secured frames
with 8-penny nails. Tapping the nail twice,
waiting for it to bite into the soft wood
where he made sure nothing
would move.
I rode my bike heading nowhere in particular,
sometimes his reluctant sidekick
when choosing the perfect 2x4s with him at Hechinger’s.

Cool in the summer, cold in the winter,
I learned how to crisscross and jump double-time
claiming my own swath of space in unfinished
limbo land; my eyes wandered
to the nails, washers, drills, hammers
and sawhorses awaiting their master.

I heard a few creaks from upstairs,
Mom yelled at Dad
through the kitchen vents,
Why isn’t it done? her usual fire starter.
The neighbor two doors down has a finished basement,
why can’t you?
Because I can do it cheaper myself, he countered.

On the same day my father
finished the basement,
he retired to South Carolina
where basements
don’t exist.

My hands scarred below the knuckles,
thumb nails split,
yellow like old caulk at the nailbed.
A thin circle on the left hand,
tanned reminder of a tossed commitment.

I build a carport in suburban D.C.
for a one car, four-person family
where the summers suck vacuumed humidity
and the winters ice glass roads.

Now to measure, splice the wood,
and sand the planks.
My tool belt slaps against my hip
as I wrestle fickle nails with torn flesh.

My body is a ’78 Chevy El Camino,
pewter blue, silver rails along the bed,
creaky on turns with shitty acceleration on entry ramps.

I wonder myself how I smoke and work,
but I have strong teeth and don’t need an ashtray.

Be the first to review “Unfinished Projects” Click here to cancel reply.