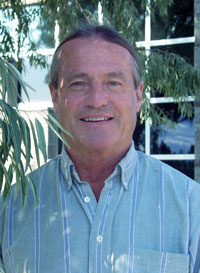 Lowell Jaeger teaches creative writing at Flathead Valley Community College in Kalispell, Montana. He is author of four collections of poems: War On War (Utah State University Press, 1988), Hope Against Hope (Utah State University Press 1990), Suddenly Out of a Long Sleep (Arctos Press, 2009), and WE (Main Street Rag Publishing, 2010). Currently Lowell Jaeger serves as Editor of Many Voices Press and is busy compiling New Poets of the American West, an anthology of poets from western states. He is a graduate of the Iowa Writers Workshop, winner of the Grolier Poetry Peace Prize and recipient of fellowships from the National Endowment for the Arts and the Montana Arts Council.

“A wonderful book. The beauty, word play and humor in these poems are delightful!”

In his new book, entitled WE, Lowell Jaeger turns his exacting eye on family, friends, and strangers, delving for our common humanity in the many senses of the term common as ordinary, public, and shared. The poems, though they may range across time, portray a soul community in a rough and tumble place, an American place of tragedy and redemption, where someone can as easily drive past a homeless person as give the pregnant teenage waitress a forty dollar tip. No one’s a hero, nor is anyone downright evil. His allies are workers: weary housewives, sewage drainers, hotel maids, bartenders. No one’s perfect, and he lets no one off the hook, whether father, neighbor, or himself. If there is a message here, it’s we’ve got to keep trying, which is probably the most humane message of them all.

Lowell Jaeger’s new book eclipses the paltry stature of the well-to-do by dealing out poem after poem honoring plucky strangers and indelible kin. These portraits deliver in deft and quirky detail what he calls “the gymnastics of making do.” My eyes are opened by this book to the spell-binding array of biographies resident at the edge of my vision every day. Having read these poems, with their courage in seeing and skill in saying, I will not go forth into this world as I was.

–Kim Stafford
author of The Muses Among Us: Eloquent Listening
and Other Pleasures of the Writer’s Craft

strings twinkle lights, tree to tree.
This takes a ladder and a hammer.
Rakes a mound of dried pine debris
and duff. A single match. Flames clamor,
a bonfire. Which takes cordwood,
chainsaw, leather gloves, and sweat.
Dumps bags of crushed ice to chill
drinks in the cooler. The sun is set.
His wife leans out the window sill-
Joe, she calls, come help if you would
carry the folding tables, plastic chairs
from the shed. She totes trays of pears,
cheese and bread. A party, ready to go-
which takes me and the others. Hello. Hello.

painted his house
the colors of his favorite team.
Watched the playoffs
on his big-screen TV.

In his recliner
with a beer at hand
he’d coach his players out loud.
An intimate whisper
in the batter’s ear.
A rant from the dugout
over a fumbled grounder.

First I met him, he swallowed
my handshake
in his bricklayer’s paw,
calloused as a catcher’s mitt.

Once I watched him, Sunday after church,
watering his lawn, shirtless.
A thicket of hairs down his back,
shoulders of an old bull,
beer-barrel gut.

Three neighbor boys pedaled
up the walk, into a puddle
at his feet, splashing his good shoes.
You little sons-of-bitches, he hollered.
Turned his hose on them
as they scattered screaming gleefully.

We didn’t have much to say.
I’m no sports fan.
Nodded hellos, mostly.

When he ruptured a disk,
I drove his girls to school
on my way to work.
And brought them back.

When tragedy befell my household
-all the cards and letters,
the sickly pious condolences and prayers-
none of these lifted me much

as the day I came home
to find a battered postcard
jammed in the backdoor seal.
His team’s logo, full color.
His sincere scribble,
I’m cheering for you, pal.

Plastic bracelet signifies
unescorted minor. Fidgety
pre-teen assigned
to the seat beside me. Shuttled
twixt Dad’s new life,
Mom and her boyfriend back home.
Up in the air.

I shake my head
how the world’s changed. The kid
flips open his lap-top. Splats
aliens, as a rap rift thumps
in his headphones. Shouts
at me like I can’t hear.

And just when I’m worried I’ve glimpsed
humanity’s impending collapse,
the kid elbows me
to confess he’s smuggled
contraband. A gift
for his best buddy in school.
(Wanna see?)

Digs in a hidden duffle.
Keeps a sharp eye
on the steward’s back, turned. Extracts
a tattered shoebox, holes punched
top and sides.

It’s a big one, he says.
Named Lumpy.

Be the first to review “We” Click here to cancel reply.