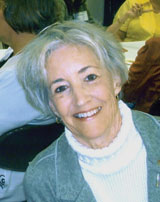 Lianne Spidel grew up in Detroit, daughter of an automotive artist to whom her chapbook of art poems, Chrome, (Finishing Line Press, 2006) is dedicated. Her poems have been anthologized in I Have My Own Song for It: Modern Poems of Ohio (University of Akron Press, 2002) and have appeared on Poetry Daily and as featured poems in the archives of Poetry. A high school English teacher in Michigan, Maryland and Ohio, now retired, she is a graduate of Wittenberg University and the University of Michigan Rackham School of Graduate Studies. She is the mother of two sons, a member of the Greenville Poets and a longtime friend of Michigan artist Ann Loveland, whose watercolor painting appears on the cover of this book.

I love the clear, straightforward, from-the-heartness of Lianne Spidel’s poetry. Whether addressing a long-lost imaginary friend, or observing a man just diagnosed with Alzheimer’s, readying for suicide, What To Tell Joseme reminds us of what it means to be human, and why it’s still a good thing to be.

Lianne Spidel’s luminous and lucid poems reach back to invisible friends and World War II privations, forward to class reunions and grandchildren, nursing homes and young men scoping out girls at Wal-Mart. Spidel has a wonderful sense of the currents of meaning and feeling in everyday moments, a watchful eye for visitations that might be ghosts, and a keen ear for the hum of love and desire that connects and complicates everything.

—Jeff Gundy, author of Spoken among the Trees

No talking at the table, Mother
shushing at the sink, good smells of toast
and coffee as my father studies maps
in the newspaper to French villages,
German cities, the radio spewing news
fast as the sleet against the window.

Juice at my place, oatmeal
with a melted pool of brown sugar,
a capsule of cod liver oil to ruin
everything, while across an ocean
my parents’ seven nephews wake
in foxholes or return from flight.

As my father tries to guess
where each may be, his pencil follows
the shores of the gray Atlantic. Days
after the night it happens,
a phone call tells him that two of them
have gone down together in one plane.

June 6, rain on the window,
corn flakes in a bowl, Jamie
with a forty-pound radio strapped
to his back, men pressing against him,
waiting for a metal ramp to fall
and give them to the beach,

unimagined details that we dread
and hunger for that Sunday morning,
a day for waiting, for prayers.
All we taste is terror,
and everything that matters
remains unknown.

From the front porch steps,
she watches the weight of darkness
sink into summer maples,
carrying them down into their own shadows,
aware of the working hinges of her eyelids,
of the hard step beneath her thighs.

In the cricket cadence of evening
her mind stretches forward at will,
over the next block and on past the fields
beyond town, toward some unknown kitchen
lost in night, some room where she might
relight the small lamp of herself.

Upstairs the children sleep now,
small boys who hum away
their afternoons in the yard,
knowing she will be there, moving
through the rooms in patterns as sure
as afternoon light on the walls.

She hears the back door close,
knowing the care he takes
to back out silently. It will be dark
in the car, so she need not imagine
light on his smooth hair
or his long fingers on the wheel.

Through maple shadows on other streets
he darkens toward some new horizon
as she thinks how the thread between them
stretches fine, spins itself invisible
in darkness, so that neither will know
the exact moment when it disappears.

We’ve been treading water, you
and I, in a deep Muskoka lake
of your young days, then of mine,
watching the hills and evergreens,

the friendly docks and boathouses
smelling sweet of wood and water,
and you asking me again and again
when would we find our way to shore.

When you slept away those five days,
I thought of a stone under water
safe from storms above, within,
changeless in the way of stones.

I slept those nights deeper
than the lake, climbing from sleep
like the diver who has touched bottom
and pushed off strong, legs thrusting

upward, arms pulling toward air,
toward morning. When you woke, weak
and thin, we found ourselves
surprised to be in that same place,

the horizon still in view
but with a gentler light upon the water,
an absence of ripples. We know
there is nowhere else to go for now,

just as any stone half sunk in sand
beneath a lake has no need
to define its location or to understand
how it found its way there.

Be the first to review “What to Tell Joseme” Click here to cancel reply.