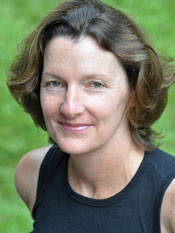 Carolyn Maher Bardos was born in Newburgh, NY, and lives in Lyme, NH. A potter and painter as well as a writer, she holds an MFA in creative writing from Goddard College. One of her favorite poets is James Wright. Her idea of a perfect day would include a bike ride with her husband, an uninterrupted browse through a flea market, an exhibition of Hans Hofmann paintings, and a little late-night Buffy the Vampire Slayer (the TV series, not the movie).

This is language from a most human stage: theaters of war, nocturnal births, daytime deaths, comedic signifying. Bardos’s book recollects the tales of main street’s limp secrets . . . of time passing through generations of family, loves, in eternity-when we thought lives “happened this way / everywhere.” As one generation occupies space for another with laughter and surprise (a turban on an unexpected head, washtub beer and lolling Jupiters, ordinary heroes as part of an unseemly cast that’s an arcade of bleeping applications)–this is poetry in the flesh, mortified, tongues condemned and convincing.

–Peter Money, author of Che: A Novella in Three Parts

Carolyn Bardos takes the mud of memory–a painful, tender, gritty history-and molds it on the page. The results are poems that seem to form even as you read them–the clay feels still wet, the words new. It is often in the line breaks–the pull back to the last line, the stretch to the next-that the poems are at their most poignant, playing out the pain of coming into form, of growing up, the making and breaking in each line and each life.

Yesterday’s Daybreak traces the life of a young girl in a decaying industrial town on the Hudson River from her early years to her adulthood. The poems not only describe this coming-of-age, but also demonstrate the development of the artist, not as a writer, but as a potter. The clay becomes not only the thing from which to make pots, but also the very substance from which human life develops and to which human life returns. Bardos’s language is surprising and fresh. We can smell the river, both the fresh water and the polluted water. We can hear the gulls and feel the clay beneath our cradling hands.

–Jane Elkington Wohl, author of Beasts in Snow: Poetry of the American West

Her teeth came out at night.
Time to scrub my choppers,
she’d say with a sunken
grin. I followed her and saw

her teeth in her hands, gums
the exact pink and waxy sheen
of her bathroom tiles.
When I slept at her house

my eyes opened in the morning
to two rows of teeth
on a night table
an arm’s length from me,

teeth submerged
in half a glass of water,
teeth exiled
from my grandmother’s warm

smile, her gentle speech.
I wanted to snatch those choppers,
take them home and drop them
into my fish tank. I pictured

how they’d sink past carp,
tetra, midnight molly,
how they’d nestle in neon-blue
gravel near the bobbing skeleton,

the pirate’s chest full of fake
rubies and gold coins, the plastic
eel grass too brightly green
to have come from the sea.

His Name Was Gary

Deaths and accidents ignited
ordinary days, as they will
in tough towns anywhere.
A boy she knew in middle school–
was he twelve or thirteen?–
swiped his father’s gun
one day around Halloween.
He shot through the roof
of his mouth
in his best friend’s attic
where he’d shown up hysterical and shorn
after his father had sat on him,
pinned his arms, shaved off
the long thick hair
all the girls loved to touch.

A teenage girl slips past the living
room where her mother sinks
into ratty soft chair and her father,
legs crossed, holds one slipperless foot
mid-air for gray-faced retriever to lick.
TV light flashes blue in a corner,
scenes of death in Southeast Asia,
no news, no change.

The girl removes herself
to her place in the basement,
passes cobwebs, shelves that heave
with dirty cans–wax beans,
potatoes, pickled beets–
mother buys on sale,
no one eats.

Familiar odors to breathe down here,
damp rags and laundry soap, mops
that never quite dry. The air smells
of time and silence. Clay waiting
in a bucket smells like calmness,
as the girl imagines the earth did
in the beginning and might again
if the dust ever settled.

The girl sits at her potter’s wheel,
smoothes a lump of clay with her hands
into a ball the size of a grapefruit.
She hears nothing
but the whirring spin of the wheel.
She thinks of nothing
but four steps she’s learned–

she believes may make it
through the fire, make it
all the way to a table
laid for dinner, perhaps to a pair
of hands arranging lilacs or lupine
wet with rain and purple
like yesterday’s daybreak,
like tomorrow’s.

Be the first to review “Yesterday’s Daybreak” Click here to cancel reply.